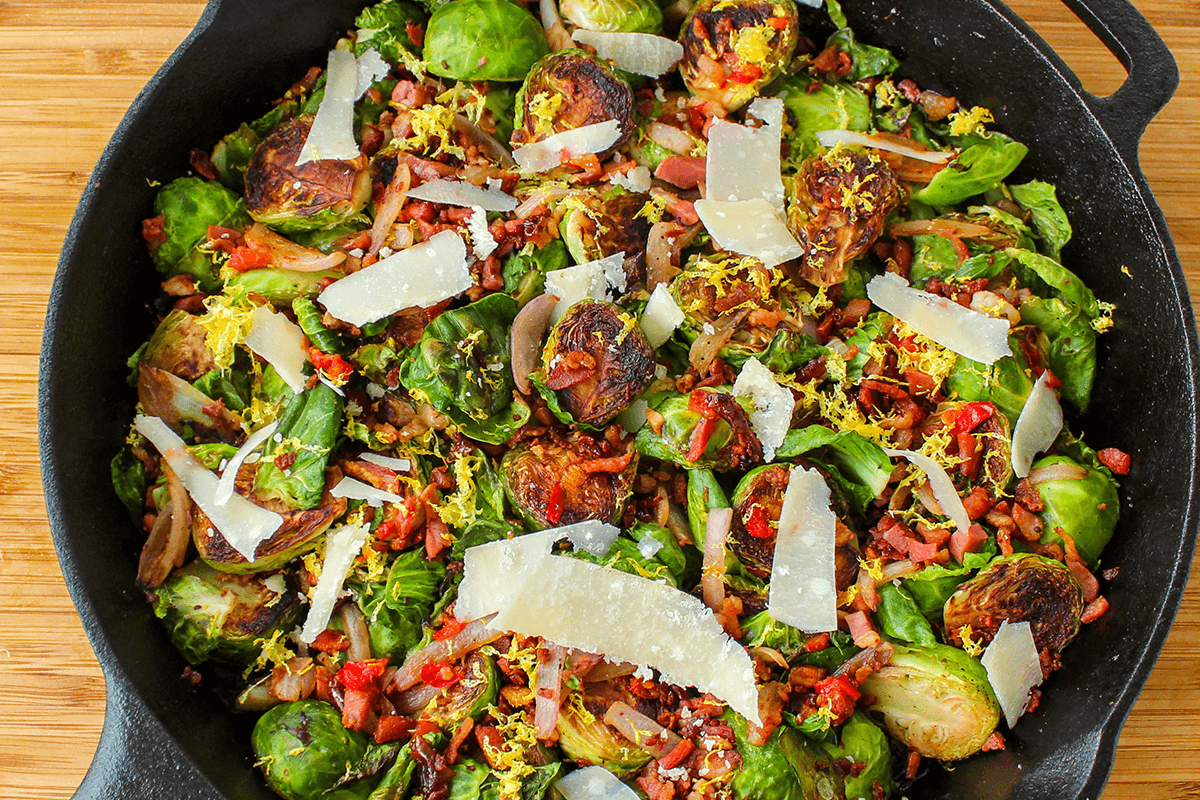 There are a number of topics that leave the masses polarized: Justin Bieber, gun control, the Kardashians, flavored vodka, healthcare reform, Jersey Shore, head cheese, Kayne West, the border wall, Nickelback, fruitcake, kneeling during the national anthem, and pretty much anything Trump to name a few. In each case, the arguer believes their viewpoint is valid and without contention, empirical evidence, logic and reason aside. Brussels sprouts seem to be one of these topics.

People are either head-over-heels gaga about Brussels sprouts or loathe them with such disdain they look like they just walked out of a Holocaust Museum with a fresh case of IBS. And haters gonna hate. The mention of these tiny cabbages conjures up a myriad of dismissive responses ranging from a simple grimace to slurs of onomatopoeias—and not without reason. For centuries, the prima facie method for their preparation (e.g. your Nonna’s way of cookin’ ’em) was to boil them. Boiling may be a good way to sterilize a tattoo gun or wash your gym socks, but not the ideal way to treat any vegetable.

That’s no way to treat a vegetable

Boiling foods is almost always the worst way to cook them. Pasta, of course, is an obvious exception. Even if you are camping, broken down on the side of the interstate, or just slumming it hungover in a dorm room you only vaguely recognize, do not assume boiling is an acceptable method of cookery. Why take all the flavor from the food and give it to the water? There are so many better ways to approach just about every ingredient: Baking, braising, broiling, grilling, pan-roasting, poaching, pressure-cooking, sautéeing, smoking, steaming, submerged in a sous-vide bath or, using our ancestors’ go-to method, with a wood fire. For crying out loud, except for the quick occasional blanch, remove the idea of boiling vegetables from your mind.

Brussels sprouts are a gas

Brussels sprouts, like any Cruciferous vegetable (cabbage, kale, broccoli, cauliflower, etc.), are rich in hydrogen sulfide gas. This gas generally escapes when the food is broken down in the large intestine—hey, that’s a party! It is also released when these vegetables are boiled, leaving your house smelling somewhere in between stale chicken broth and musty feet. Not to mention, boiled Brussels sprouts are slimy, discolored, and unwelcoming. No wonder they have a bad rap (at least they weren’t named head cheese). Conversely, roasting these “cavoletti” until they achieve a deep caramelization while they are cavorting with the likes of crispy pancetta—that, my friends, is a marriage made in heaven.

There are a few ways to achieve caramelization that is desirable, but pan roasting is the easiest and most manageable. Use a good heavy-bottomed pan to render the pancetta first. Once your bacon reaches its desired doneness, remove it with a slotted spoon, leaving the fat behind. Cooking the sprouts in the rendered fat provides an outstanding cooking medium that imparts immense amounts of flavor.

Pan roasting is not sautéeing. There are situations where a smoking hot pan is crucial to your success; however, this is not one of them. Similarly, if you choose to oven roast your sprouts, do so at a lower temperature. Cooking low-and-slow will allow the appropriate time to concentrate the natural flavors, develop more sweetness and a more delicate texture. Additionally, you are a lot less likely to burn anything.

Simply place your halved sprouts face down in the hot fat and leave them alone. Don’t nervously start fidgeting around in there with your tongs. Let them be. This is usually when I tell you to pour a glass of wine. Proper caramelization takes time. Not a lot of time, but you disturb the process every time you poke around in the pan. Once they have reached that beautiful charred color, gently toss them around in the fat so the other side can reap the same benefits.

If you decide to go down this route, no one will fault you. Prepare a baking sheet, preferably with parchment paper. Toss your halved sprouts with some olive oil (and hopefully some of that amazing rendered fat from the pancetta). Season them, and place them cut side down on the baking sheet. Leave them undisturbed for at least 35 minutes before checking them. Keep in mind, how well each oven heats and retains that heat varies, so providing an exact precise time is impossible. Gently toss them once if oven roasting, but not before the cut sides have developed deep color.

A few words about cast iron

Most food savvy folks know of J. Kenji López-Alt and his culinary acumen. In case you have not heard of him, his article “The Truth About Cast Iron Pans: 7 Myths That Need To Go Away” is a must-read. Rather than plagiarize it or spend time rewriting it in my own words, here is a link to the original article.