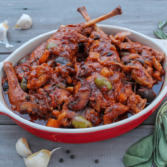 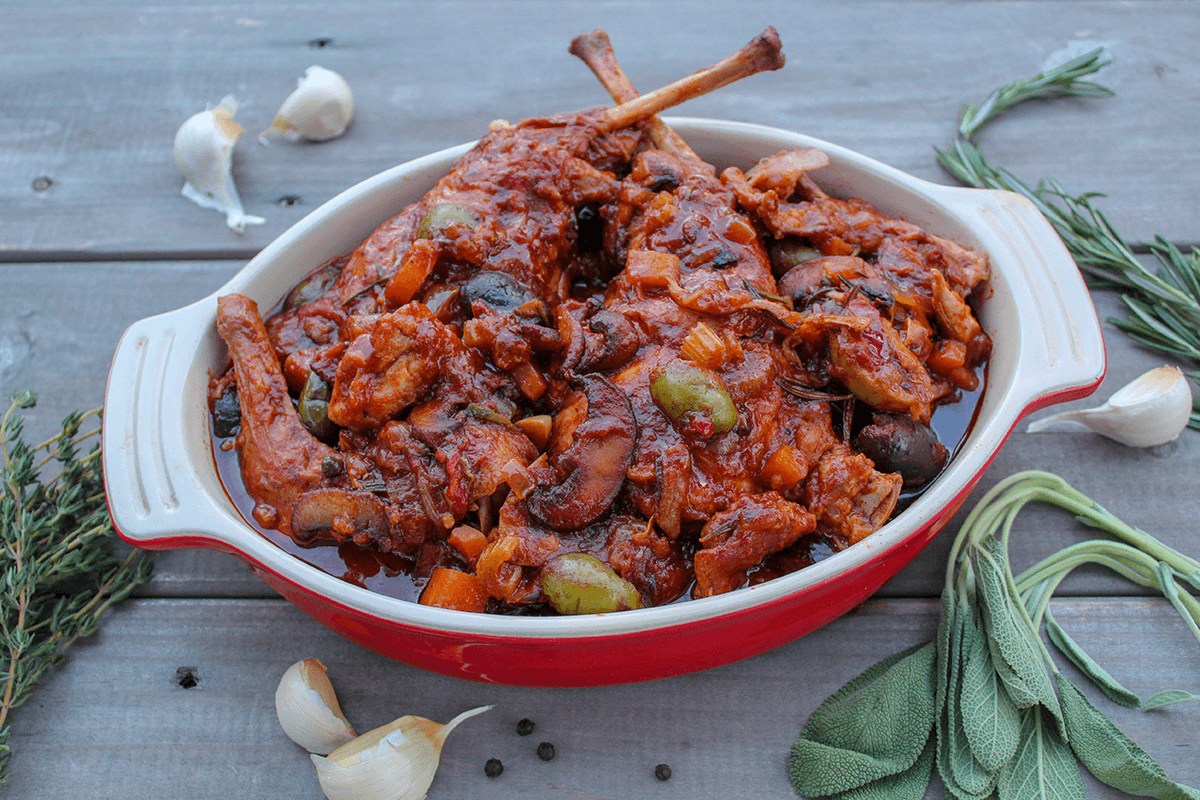 Rabbit in the style of the hunter’s wife

Alla cacciatora is often referred to as “hunter’s style”, but the feminine noun “cacciatora” suggests this literally translates to the “hunter’s wife’s style”. Not so long ago in Italy, around Europe, and even in the U.S.—prior to the modern conveniences of supermarkets and industrial farming—most families had at least one hunter. The hunter, though, was most likely not the one preparing the hunted. The hunter’s wife deserves credit for that.

This is also why there are as many recipes for alla cacciatora as there are households. Any sincere inquiry into the one true recipe for the hunter’s style would be an exercise in futility. The origin of the dish is unclear, but because it is essentially no more than a simple braise, each household’s recipe was shaped by what was locally available. In the north, white wine; in the south, red. The use of peppers, mushrooms, olives, tomatoes, and other ingredients was dictated by availability, culture, and tradition.

My recipe blends elements from several regional styles to develop my version of the ultimate “alla cacciatora”. Some ingredients have an earthiness reminiscent of being foraged from the forest; while others are a homage to my childhood memories. Naturally, each of them complements the dish as a whole. Nevertheless, use my recipe as a guideline to create lo stile della moglie del tuo cacciatore.

That is to say, if you are not a fan of mushrooms, for instance, leave them out. Want more chilies and fewer capers, have at it. Some recipes insist on bell peppers—that’s not a sin. If you prefer to use a red wine instead of a white, no one will fault you. Keep in mind, rabbit, like veal, has a very delicate flavor that is easily obfuscated by a more robust, tannined wine. For this reason, the selected approach is similar to my recipe for Ossobuco. A non-imposing white wine will leave the rabbit at center stage. The herbaceousness and floral notes of the vermouth suggested will offer your braise slightly more complexity. In the end, feel free to have fun with what comforts your palate and make it your own.

Most importantly, purchase a humanely-raised rabbit fryer free of hormones, antibiotics, additives, and preservatives. If you do not have a butcher you trust, use the links provided in the footer.

Remember Elmer Fudd? Always on the hunt for Bugs Bunny. Well, art imitates life. Just as cave etchings, clay amphoræ, gothic cathedrals, Renaissance paintings, and Baroque sculptures all offer us a glimpse into the life and times of our ancestors, Saturday morning cartoons depict life in the United States in the first half of the 20th century, down to the last culturally-insensitive stereotype and racial slur.

Just as most households used to have a hunter, rabbits were a mainstay for dinner. Watch any period piece—there’s always a rabbit in the pot. While this is still true throughout Italy, France, and many other countries, it was very much a reality in the United States through WWII. In fact, there were even propaganda posters enticing Americans to farm rabbit for food.

So what happened to rabbits as a main course at the dinner table? They are easy to clean and cook, provide lean meat, and possess a flavor beloved by many a chef. As it turns out, rabbits did not enjoy the same industrial farming boom as chickens—initially sought-after because of their eggs. Rabbits, once adorning many a supper table, fell out of fashion. Chicken, on the other hand, industrially-farmed and commercially-available in supermarkets, became a household staple. This remains the same today, as every grocery has rotisserie chicken available, and fried chicken franchises litter every corner. A half-century ago, recipes for rabbit and other less-domesticated animals, like venison, elk, boar, duck, and even squirrel, dominated cookbooks.

So, don’t allow Disney animations from the 1940’s about wide-eyed, furry little friends frolicking in the forest to prey on your psyche. In this case, stick with Looney Tunes. Elmer Fudd knew what was up, Doc. Rabbit is delicious. Sorry, Bugs. 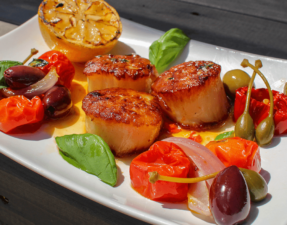 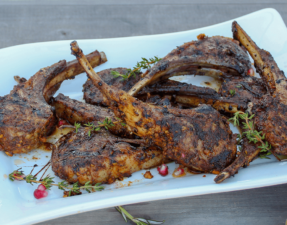 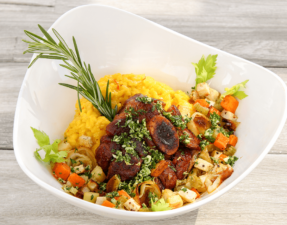