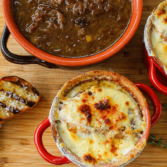 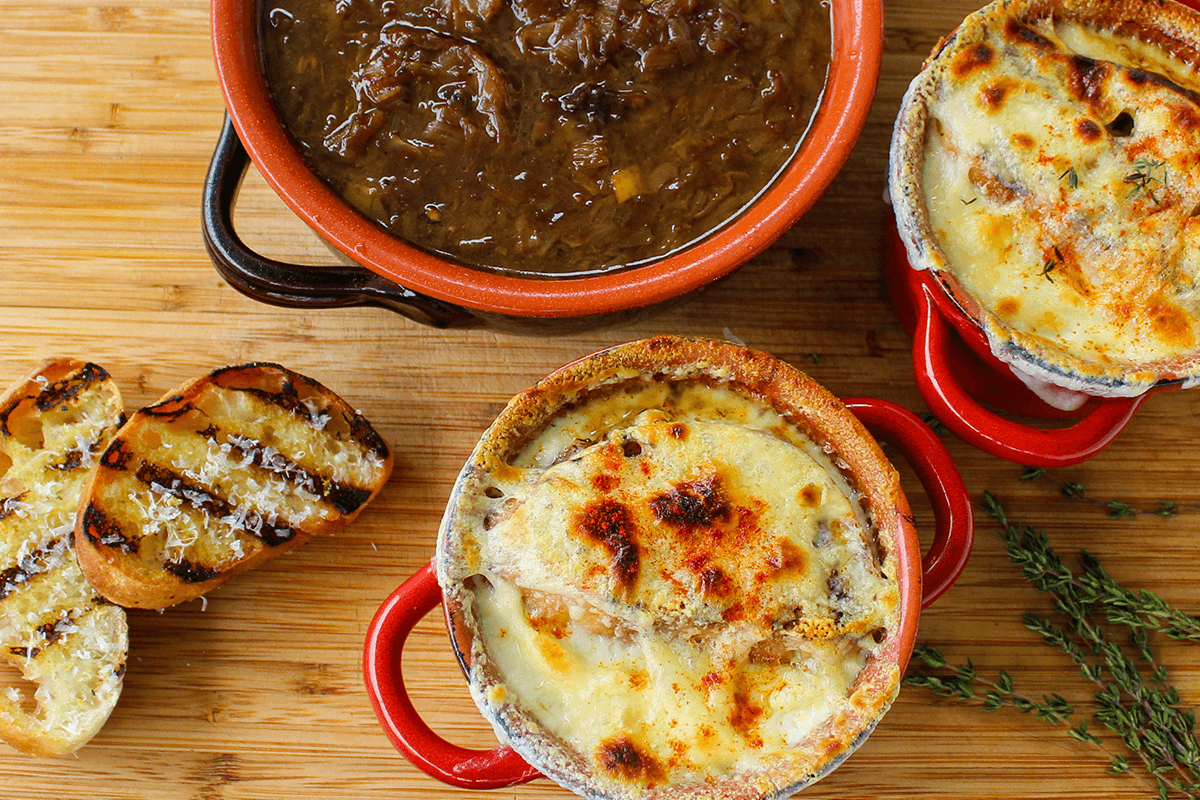 Italian Onion Soup. Doesn’t really have that familiar ring to it, does it? Before the Francophiles accuse me of blasphemy against the popular French version, let the record show that the origins of onion soup date back to antiquity. Onions, being easy to grow in a fairly short amount of time, have always been accessible to the poor. Onion soups were a mainstay in any European peasant’s diet, and it is well documented that they were common fare in both Ancient Greece and Rome. Carabaccia, a Tuscan Onion Soup, was popular during the Renaissance and is rumored to have been a favorite of Leonardo da Vinci.

So, the French do not really own the rights to onion soup; however, they raised the bar significantly by caramelizing their onions and adding beef stock, a little booze, and a gratinéed top.

A soup with a haughtily debated history

Some say it was a product of the peasants in the Les Halles market. Others attribute the recipe to King Louis XV who, returning from a hunt, saw his pantry was bare except for onions, butter, and champagne. Yet others claim it was invented by Nicolas Appert, the father of food preservation and inventor of canning. Apparently, he prepared a meal for the Duke of Lorraine, former King of Poland, who was in the Palace of Versailles visiting his daughter, who was also married to Louis XV. Supposedly, the Duke loved the recipe so much he went to the kitchens to painstakingly learn the method and later share it with other high born.

The Parisians and Lyonnais still fight about which city is the rightful birthplace. Everyone wants credit for something when it is awesome. Regardless of how it came to be, French Onion Soup is a perfect comfort food.

The reason is it so outstanding? Caramelized onions. Caramelizing onions to draw out their natural sweetness offers an unmatched depth of flavor. Incorporating beef stock takes the richness even further and the addition of sherry or cognac right at the end adds even further sweetness and complexity. The pièce de résistance is floating a crouton in this luxurious soup, then melting Comté, Gruyère, Emmental or Fol Epi over the top. Absolutely decadent.

Escoffier neglected to include a recipe for onion soup in Guide Culinaire — likely because it was viewed as peasant food rather than haute cuisine — which seems like a tragic irony as it crept its way into the hearts of some of the world’s best French chefs and onto the menus of many haughty bistros and Michelin-starred restaurants. But enough already about the French already — this is an Italian kitchen!

Your recipe calls for “an onion.” That’s vague.

Read a lot of onion soup recipes to realize not much attention is given to the onion itself. Some recipes specify yellow onions or sweet onions — but most of the time, they simply call for onions. The issue is each onion has a distinct flavor which only intensifies or mellows with caramelization. To properly pay homage to Italy and onion soup in a single stroke, this recipe uses alliums native to the homeland and used in Italian cooking for centuries.

Cipollini means “small onions” in Italian, so saying Cipollini onions is somewhat analogous to saying ATM machine, LCD display, or PIN number. Once only found at high-end bistros and gourmet markets, Cipollini gained enough popularity to reside in the local supermarket. They are sweet, mild, delicate, and excellent roasted or braised.

Cipolle di Tropea, or the Long, Red Onions of Tropea, are sweeter and milder than other onions. In Calabria, they are eaten raw on salads and made into jams, much like the red onions consumed in the USA. If these onions are not available, substitute Wethersfield red onions, common in the United States, or order seeds and grow them.

Although commonly associated with French and New American cooking, shallots have been in Italy since Roman times. Believed to have been discovered by Marcus Aurelius in Canaan, shallots are widely grown in Italian gardens. The origin of the leek is also the Mediterranean, and accounts of its uses date back to the Ancient Egyptians. Both are standard in Italian cookery.

Blending the Cipollini and Cipolle di Tropea with the leek and shallot offers a perfect balance of sweetness and brightness with a slightly bitter edge. Still, feel free to experiment with any alliums of your choosing. Try scallions, Catalan Calçots, Potato Onions, or Savannah Hybrid Sweet Onions.

Take time to build the flavors

Caramelization takes time. If you are in hurry, do something else. Patience and the occasional stir with a wooden spoon will achieve the rich espresso color desired. This goes without saying, but burning the onions will ruin the soup. This is not a “turn it up to high heat and walk away” situation. There’s time to pour some wine and contemplate life’s mysteries. The onions don’t require the attentive stirring that a risotto would; still, stay in their vicinity. Don’t start edging the yard, searching for mismatched baby socks, or doing your taxes. Spend time with your onions.

About 45 minutes in, when the onions have developed that deep, intense tobacco color, add the Marsala. Cook the wine down with the onions until the liquid has a syrupy consistency. Next, add the beef and chicken stock. It is important to note that the type of stock used is a personal choice. You could use beef stock exclusively, or vegetable stock — which makes this soup accessible to vegetarians. Additionally, if you do not have cheesecloth on hand and there is no easy way to make a bouquet garni, a few sprigs of thyme, a bay leaf, and some cracked peppercorns will suffice as seasoning.

A few words about bruschetta

First, pronounce bruschetta with a “k” sound like Chianti or Chiaroscuro. Broo-SKET-ah. Second, bruschetta has nothing to do with a tomato and basil (or any other) condimento — it refers to the bread itself.  Bruschetta derives from the Italian verb bruscare, meaning to sear or grill over coals. Take some artisan bread, brush it lightly with olive oil and rub it with a garlic clove. Next, set the bread on a hot grill until grill-marked. That is proper bruschetta. Having said that, if no grill is available, don’t sweat it. A crostini would work just fine here, but the charred flavor of the bruschetta adds a nice touch.

The battle of the cheeses

France produces many wonderful things — among them wines and cheeses. Italy, however, is a worthy rival if not a champion.  Parmigiano-Reggiano is arguably the king of all cheeses. A light sprinkling of this on your bruschetta is a fitting antipasto in and of itself. To crown this soup, it is the capo di tutti capi. Fontina Val d’Aosta, a semi-soft artisan cheese produced since the 12th century, is sweet, creamy, nutty, tangy, perfect for melting, and every bit as good gratinéed as Comté or Gruyère — if not better. This is the coup de grâce, to use a French term.

Nothing is more calming to the mind and satiating to the soul than a good soup. All those beautifully caramelized onions nestled into a rich beef jus with fresh herbs and a hint of fortified wine topped with a charred bruschetta topped with oozing melted cheese. That is a crock of pure life-giving joy. What more could anyone ask for? Enjoy.